Eastbound into the Cosmos by Thomas Burke 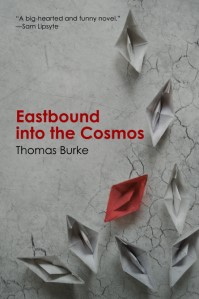 A dark comedy about new kinds of faith and spirituality—what people want, and what they’re willing to do to get it.

American culture is strange, and it appears even stranger after a hiatus. Cue Everett, back in Chicagoland after living in China. His head is spinning. His father has just died, plus, basic reentry to the life he once knew is increasingly taxing and complicated. On top of that, it seems that while he was abroad, everyone Everett cared about dove off the deep end into some particular madness. Exhibit A: Everett’s mom, recently widowed and with a newfound faith in healing crystals and a pony-tailed guru. Exhibit B: former roommate Dino and his new ascetic lifestyle—no more tasty food, ditto with sexy thoughts and the rest of life’s pleasures. Increasingly driftless and desperate, Everett signs onto an unconventional business venture that lands him at the center of the high-stakes world of mushroom smuggling.

Everett observes many strange desires in the world, as well as the lengths people are willing to go to meet those needs. Do the ends justify the means? What even are the ends? Eastbound into the Cosmos is the story of Everett’s attempt to process it all—the longing, the grief, the weirdness. Along the way he discovers the weird in himself, too, which may just be the thing that ultimately frees him.

About The Author, Thomas Burke

Thomas Burke received a BA from Union College and an MFA from the University of Massachusetts at Amherst. Eastbound into the Cosmos is his first novel. He has contributed work to Tin House, The Rumpus, Playboy, Hobart Pulp and St. Petersburg Review, among other places. He has taught at UMass Amherst, the Newberry Library, and Northwestern University, where he is currently assistant director of the Kaplan Humanities Institute. Formerly Burke helped direct the Summer Literary Seminars in Russia and co-founded its sister program in Kenya. He is the recipient of the Eugene Yudis Prize for fiction, a fellowship from the UMass Amherst MFA Program, and a residency at Art Omi’s Ledig House, among other honors. He lives in Evanston, IL with his wife and two children.

Praise for Eastbound into the Cosmos

“Eastbound into the Cosmos is a big-hearted and funny novel about youthful folly, youthful grief, and the intricacies of an international mushroom smuggling business, among many other intriguing things. Thomas Burke has fashioned a winning narrator in Everett: witty, self-deprecating, honest, and always searching the darkness for human wisdom. And you never know where you’ll find it.”

“Imagine a modern-day cross between Alexander Portnoy and Frederick Exley and you just might have Everett, the titular heart-on-his-sleeve, slacker hero (anti-hero?) of Tom Burke’s hilarious debut. Reading Eastbound into the Cosmos conjures that feeling so many of us have in the Trump era: How did we get to this point and when exactly did everyone around me go certifiably insane? In his case, Everett returns to the American suburbs from time poorly spent in China to find his parents marriage fallen apart and his life at an undignified dead-end. A hilarious, riveting read you’ll want to ride all the way to the surprising end.”

Jeff Parker, author of Where Bears Roam the Streets

“Tom Burke’s accomplished debut novel Eastbound into the Cosmos is riveting, fast-paced, and full of heart. The prose is careful, and the story is often hilarious. Tom Burke is an author to keep an eye on.”

Jeffery Renard Allen, author of the novels Song of the Shank and Rails Under My Back

“Thomas Burke’s splendid new novel is at once a darkly comic international caper and a remarkable investigation of grief and spiritual longing. In these pages you’ll encounter a delightfully loathsome guru, a recently deceased father, a persecuted cult-like sect, and a profoundly misguided mushroom-selling venture. Do yourself a favor and dive in.”

Dawn Raffel, author of The Strange Case of Dr. Couney

“Full of energy, intelligent, fast-paced, darkly humorous and poignant in the vein of a cross of sorts between David Sedaris and the late great Soviet/Russian/Abkhazian writer Fazil Iskander.”

Mikhail Iossel, author of Notes from Cyberground: Trumpland and My Old Soviet Feeling

“Eastbound into the Cosmos is a lively exploration of spirituality, desire, and loneliness. Tom Burke expertly blends action with introspection, the bewildering present with the pained past.”

“Everett returns from China in Eastbound to the Cosmos to mourn his father, and surprise! a crystal-laden mother. Until you get to “Mom’s weird apology-baptism thing,” you aren’t sure whether the hero will survive re-entry. Indeed, he even makes a quick and harrowing return trip. From a fight over homemade icicles to flying turkeys to the cultish Xuan Gong and a (non-hallucinegetic) mushroom bust, Thomas Burke effortlessly takes the transparent and makes it ‘dark and spiky.’ Lose yourself in Eastbound to the Cosmos and cheer for Everett.”

“I became aware of Tom Burke years ago when a character of his named Worm insisted on being called Whurm.  This moment has stood proud in my brain ruined by thirty-four years as a schoolmarm teaching writing.  Eastbound Into the Cosmos is so odd it feels like Worm insisting on Whurm.”