To celebrate the launch of The King of Confidence, author Miles Harvey and Ben George, his editor at Little, Brown & Company, will have a virtual conversation about the making of a book that Vanity Fair calls a "rollicking story, ripe for a Hollywood treatment," Library Journal describes as "a tour de force of popular history," and Kirkus calls "perfect for fans of Devil in the White City." Harvey and George, who collaborated closely on this work from conception to completion, will discuss the story behind the story--the author-editor relationship in the creative process.

About the book: In the summer of 1843, James Strang, a charismatic young lawyer and avowed atheist, vanished from a rural town in New York. Months later he reappeared on the Midwestern frontier and converted to a burgeoning religious movement known as Mormonism. In the wake of the murder of the sect's leader, Joseph Smith, Strang unveiled a letter purportedly from the prophet naming him successor, and persuaded hundreds of fellow converts to follow him to an island in Lake Michigan, where he declared himself a divine king.
From this stronghold he controlled a fourth of the state of Michigan, establishing a pirate colony where he practiced plural marriage and perpetrated thefts, corruption, and frauds of all kinds. Eventually, having run afoul of powerful enemies, including the American president, Strang was assassinated, an event that was frontpage news across the country.

The King of Confidence tells this fascinating but largely forgotten story. Centering his narrative on this charlatan's turbulent twelve years in power, Miles Harvey gets to the root of a timeless American original: the Confidence Man. Full of adventure, bad behavior, and insight into a crucial period of antebellum history, The King of Confidence brings us a compulsively readable account of one of the country's boldest con men and the boisterous era that allowed him to thrive.

This event is virtual! Register for the event on our Eventbrite page to receive the Zoom link on the day of the event! 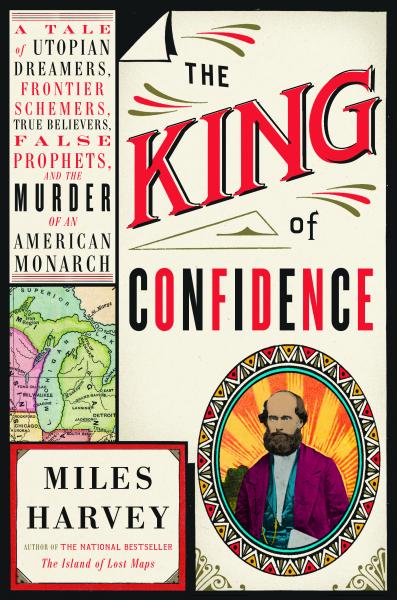 Miles Harvey is the author of the national and international bestseller The Island of Lost Maps and the recipient of a Knight-Wallace journalism fellowship. His book Painter in a Savage Land was named a Chicago Tribune Best Book of the Year. He teaches at DePaul University.

Ben George is a Senior Editor at Little, Brown and Company, where he edits Rick Bass, David Bezmozgis, Tony Earley, Adam Haslett, Leslie Jamison, Rick Moody, Edith Pearlman, and Lauren Slater, among other writers. Prior to joining Little, Brown, he was an editor at Viking Penguin and before that the co-founder and editorial director of Lookout Books. He was also the editor of the literary journal Ecotone, where he worked with Annie Proulx, Jonathan Lethem, Denis Johnson, Ann Beattie, Charles Baxter, Terry Tempest Williams, and John Jeremiah Sullivan, among many others.

The King of Confidence: A Tale of Utopian Dreamers, Frontier Schemers, True Believers, False Prophets, and the Murder of an American Monarch (Hardcover)